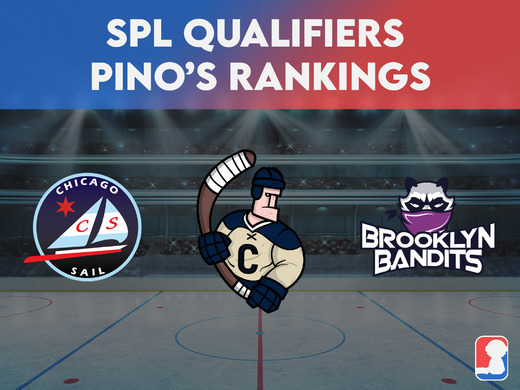 1. Columbus Clappers - Reigning champions for every single SPL season and show no signs of slowing down with a somewhat new roster that gives zero reason to put them lower.

2. Chicago Sail - Last season’s finalists made a change that appears to be slotting Yuri back into the 3 spot for the Sail after Tee’s departure. Qslvr being brought in to replace Spleen who follows Tee to Bermuda, may prove an upgrade to the Sail from the team that had the chance to dethrone the Clappers last season.

3. Brooklyn Bandits - Reigning MVP Derek along with a highly skilled Kyler gives this team the technical ability on paper to do massive damage and potentially have a shot at the Clappers, assuming MDub and Dave can bind the two all-stars together, this is a very potent team.

4. Toronto Penguins - The arguable second or third best team, full of top tier players who can play at the highest level, and are definitely capable of beating any team, but it remains to be seen if they will.

5. Yosemite Grizzlies - While this may definitely be arguable as to how high they are, this team has decent chemistry and a whole lot of technical skill, coming off a very good season in IM. This team can definitely make a run for pro with some good results

6. Quebec Baguettes - The second IM team in a row, the Bags have chem that is hard to find in SPL and they have technical ability that is nothing to sneeze at. After a second place IM finish in the final Slap 1 season, I believe they can improve on their standing.

7. Pennsylvania Ball-Peen Hammers - A very good team with a lot of chemistry, I debated putting them above the Bags, however coming off a season where they finished lower, I decided against it. Cherries can very easily have a hugely productive season and I’m excited to see where it goes.

8. Orlando Otters - Chase and Mace have been making incredible progress in their technical ability, and their chemistry is nearly impeccable. When you add Tyrant into the mix they make a very strong case to surprise a lot of people, especially with Green as another option for them.

9.  St. Cloud Storm - The last season for the Storm’s players could’ve been better, especially for Kspyre, having a slight down season, and Seppy splitting time with Rath on the Rats. Kyle has only had one full pro season, so his ability to improve off of his last season will be very important.

10. Bermuda Breakaway - Two Sail members join BradyB and Flaccid Lettuce on a team that has a lot of potential, and perhaps confidence with two finalists, but there are teams with more upside.

11. Michigan Mallards - Another open team who’s improvement since rebound’s launch can absolutely not be understated. Chemistry that rivals the bags and technical skill that could make pro, create a combo that may cause a lot of damage.

12. Salt Lake City Stampede - A team that I haven’t seen too much of, but I believe makes them a dark horse for pro qualification. They certainly have skill, but I haven’t seen anything to convince me they have great chemistry.

13. Oklahoma Exotics - A team that has amazing chemistry, full of really good players, but has yet to get an opportunity to showcase their talent properly. The Exotics have potential to get into pro, if not through qualification, in a few seasons time.

14. Cowtown Guppies - GhettoStarfish has made considerable progress since last season, and being joined by the likes of veterans Roberti and Hawk, the Guppies pose a threat to many teams.

15. Portland Porcupines - While I haven’t seen much of this team, I do know that they have significant technical ability and a decent amount of experience. If they are as good as they were individually in slap 1, they can beat a lot of teams I placed higher.

16. Canada Camels - The Camels have kept the same team for the first season, and after a good season in open, one could imagine that the Camels have at the very least decent chemistry, and all of their players have a lot of potential to grow into a threat later in the season.

17. Tri-City Poloskis - Rapier at the helm of a team that has a lot of potential, and is likely the favourites to make it out of their group.

18. Atlanta Terror - A group of players who haven’t been seen in a while. They certainly have knowledge as to how competitive slapshot works, and they will definitely be a team to watch.

19. West Virginia Orangutans - Cameron and NightSector are probably the two most notable being led by leaderboard climber FolapaFish in what could be a very good season if they can all work well together.

20. Montana Monkeys - Kush Mama leads players we’ve never seen and it leaves a lot to the imagination as to how well they can play.

21. New Jersey Minutemen - Romminator headlines a team that we haven’t been able to see much of, and with the help of Ehlasteer the Minutemen can turn into a prominent threat.

22. Winnipeg Wrath - A team with a history, but not a particularly bright one. If they can play up to their ability and potential, they are a decent threat with good chemistry, but that’s a big if.

23. Detroit Mighty Clucks - A team with upside, but one I have not seen play together enough. Consistent playing time last year was only a big theme with Kappa who finished on a 9th placed open team.

24. New York Cyclones - The Cyclones are a team with two vets in Get Woke and Sonicshadow, but we haven’t seen much of them recently, adding some uncertainty to a potentially dangerous squad

25. New York Cleavers - Another New York team full of vets, even though they are mainly open division players, they can cause problems for teams and make a run at any time, MSNOWinner is likely going to be the focal point of a few upsets.

26. Pennsylvania Bats - I haven’t seen much of the team except for former Glizzy player LessThanDennis who I believe can have a breakout season.

27. Kentucky Karens - A team that is a slight offshoot of the Oklahoma Exotics, full of players that didn’t necessarily get a chance to show their talent, (mb Aube) they are a group of high potential players that can make waves.

28. Tokyo Ghoulz - Tetsu leads a team with a little flexibility alongside Zacmasta who is a proven 3 that can hold his own, but chemistry is yet to be seen out of Tokyo.

29. Tuscaloosa Pride - Beginner tournament winners, the Pride seem to have the best chemistry and passing ability out of the completely new teams, and I’m excited to see how good they can get.

30. Arizona Outlaws - Papa Shieldz headlines a team with Effxct at the helm and what could be a decent team, but it is a team I haven’t seen much of.

31. Cowtown Guplings - This team has potential and even though I haven’t seen much of them a lineup of Dizruption Greendayfan and Void is easily good enough to crack open division

32. Columbus Chill - One of the only other teams I’ve seen play, Nasher and co. appear to be open div ready and it's possible they can make it.