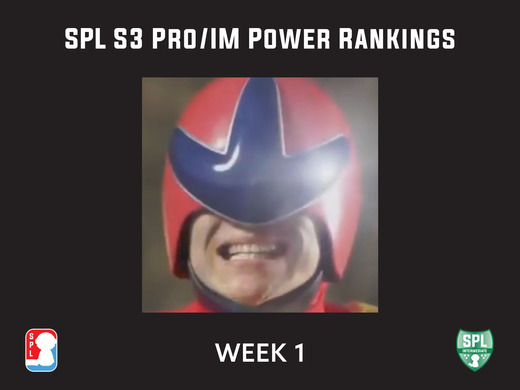 M1NN ranks the teams in Pro and IM Division after the 1st week of the season.

The Clappers leave week 1 undefeated with wins over the Vice and the Platypus. Unsurprisingly, this performance leaves them as number one on the list. It is a little disappointing that their match against the the Storm got delayed but a win over the Vice is good enough on its own to keep them in the number 1 spot

Much like last season, week 1 for the Vice was pretty disappointing. They picked up a solid win over the Surge in their first match but then lost their next two against the Storm and the Clappers. It was a tough week for the Vice competition wise, however if they want to remain a top 2 team in the league these are the types of games the Vice have to win. Still, no team below them had a good enough week to steal this number 2 spot away from the Vice quite yet.

The Storm only played one game this week so it's hard to move them up or down this week. Now, to their credit, it was a very good game for them. An 8-4 win over the Vice with Rath going on absolute tear and scoring 6 goals was great to see, however I kind of need to see more than a single game to get a better read on this team. Now, if they can pull off a win against Clappers this week….

Another team that had their week cut a bit short because of the server issues and one of only two teams moving on the list, the Surge surprised me a bit. Despite missing a member of their starting lineup, the Surge were able to keep it close against the Vice before getting Criz back and taking the win over the Bandits. When they have their starting 3 together this seems like a team that might be able to pull off an upset or two this season, sadly they will be without Kspyre this next week so hopefully Dyno can fill in well.

The Sail had some strong performances this week, including a 1st star worthy week from Walster. However, a loss against the Bandits and a good week from the Surge finds the Sail a bit lower on the list. This next week should be very interesting for the Sail, as they find themselves having to face all the top 3 teams this week. If they can pull off an upset or two, they could skyrocket up this list by next week.

Not going to lie, I expected better out of the Bandits then what we got from them this week. A win over the Sail was nice to see, but that loss to Denver was hard to watch. This team certainly has the talent to be a threat this season but I think they need a bit more time together to really gel and find their chemistry with one another. Let’s hope for their sake they figure that out sooner rather than later

Portland came into week 1 with a lot to prove and left it with...a lot to still prove. They beat the Omelets which leaves them in the number 7 spot but got handled by the Clappers and Sail. Now Portland did keep both of those losses close and Jak and Walrus seem to still have that chemistry they formed last season. My main worry for Portland at the moment is that Kush Mama seems to be a bit behind most Pro players skillswise. I’m sure over the course of the season Kush will catch up, but Portland is going to have to hope it's sooner rather than later if they want a chance at playoffs.

Denver once again finds themselves at the bottom of the list. While Denver did manage to pick up a win over the Bandits, it did have to come on the back of 13 saves from Timmy. In all 3 of their matches this week my biggest worry for Denver showed true, while they managed to produce some good defense they struggled to get anything done offensively. Denver is going to need to find some sort of firepower over these next few weeks, because Timmy’s great goaltending can only take them so far.

With two gigantic blowout wins this week it's no surprise that the Smokers find themselves in 1st place once again. Those blowouts lead to Kacktus getting 28(!) goals and to both him and Lemon picking up stars this week. There is little to complain about when you leave a week undefeated but that close win over the Barracudas does show that despite the performances, this team is not immortal. With much tougher competition this week (Baguettes and Omegas) the Smokers are going to have to prove they are capable of holding this spot.

While their loss to the Omegas does find Quebec moving down a spot this week, there is no reason to count this team out yet. Outside the loss Quebec picked up very good wins over the Exotics and Yetis and showed off the potential they have for this season. They will have a couple of chances to prove themselves against top teams this week, with matches against Carolina and Baton Rouge. If they win those two matches they could find themselves in the top 2 once again.

The Barracudas had an….interesting week. After completely demolishing Drumbo, the Barracudas found themselves falling in OT to the [REDACTED]. After suffering that upset, they went up against the best team in the division and kept them within one goal. Luckily for them, the disbanding will allow us to forget the OT loss so the Barracudas leave week 1 looking decently solid. With the Bags and the Omegas on their schedule this week the Cudas have a good chance to rise up the rankings after this week.

A good first week for the Riders keeps them in the number 5 spot for this week. While they only faced teams below them on this list, they took care of business which is always a good sign. They also did so with Love in the starting lineup instead of Dom. I don’t know if this is the plan for the rest of the season or not but it is nice to see that the Riders have some decent depth with their squad. Like many other teams on this list, their next week’s schedule is much more difficult and will give us a better look as to what we can expect out of the Midwest this season.

It seems weird that after the type of week the Exotics had to see them move UP the list but here we are. It was a rough week for the Exotics, losing all 4 of their matches while also seeing their star from last season walk out the door towards greener (ha get it?....please laugh) pastures. So, why did they move up? Well to be honest the teams below them suffered much more than they did this week so here we are. Hopefully the Exotics can find a way to turn their season around against some of the weaker competition of IM this week.

The Yetis got stomped this week. Only scoring 4 goals across two games against the Baguettes and Omegas while also losing Roberti9 to a team that disbanded only a couple of days later is uh...not a great look to be honest. However, they may be able to turn their fortunes around this week. Matches against the Cows and Riders could be winnable and they did pick up Baumz earlier today from FA so maybe the Yetis can find themselves higher on the list once again

The Cows find themselves in last place after a week that did not do them any favors. Blowout losses to the Cudas and Smokers before a much closer loss to the Riders to end the disappointing week. Outside of Kappa the Cows struggled to produce any offense this week which combined with the amount of goals they allowed leads to a really bad GD and a winless record. The Cows are going to need to make some strides in the next couple of weeks to find themselves avoiding regulation.

Games to watch this week!

After their upset over the Vice, the Storm could find themselves as a real #1 spot contender if they could take down the Clappers as well

The Vice are coming off a rough week and if the Sail could take advantage of that, we could see a very interesting upset take place

The Bandits are looking to prove themselves to the rest of the pro division and what better way to do that then to take down one of the more promising pro division squads in the Storm?

The two top teams of IM face off against each other, what more is there to say?

Much like the Omegas, the Baguettes are looking to take down the Smokers and prove themselves as one of IM’s best

The Cudas have a couple of chances to prove themselves this week, but this match against the Omegas seems like the best way for them to do it.