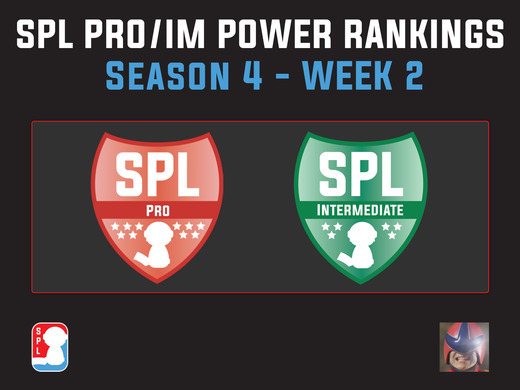 M1NN ranks the Pro and IM Division teams after the first week of the season.

The Clappers continue their long streak in the Number 1 spot. While all their victories were within three goals, the Clappers have given me no reason to doubt their placement here at the top. Panarin came up big this past week for them, picking up 17 saves as his defense proved critical in their 3 close wins this week. However, I do think the Clappers should be a bit cautious this season. As these close games proved, teams are starting to close that skill gap. Will teams close the gap in time, or is another championship waiting for the Clappers taking?

The Vice keep their number 2 spot here this week, though it's starting to look a little shaky. Close wins against Portland and Olympia followed by an overtime loss to the Sail was how their week went. Overall the Vice played well, but that loss to the Sail proves that this number 2 spot isn't completely secure. They also lacked some of their offensive firepower this week, though Timmy did well on the defensive end of things. Still, I am going to need to see more out of both the Sail and the Vice before I move them out of this top 2 spot.

So I may have misjudged the Sail a bit. Coming into this season I wasn’t sure how this team would do with TEE having to make the huge leap from Open to Pro. However, Chicago’s new 3rd took the leap in stride and helped his team stay undefeated through Week 1. While an OT win over the Smokers and a decent win over the Omegas is nothing too impressive, a win over the Vice is. Chicago used this past week to prove that they are a real threat, especially Kyler who picked up 1st star honors this week with an impressive 12 goals and 6 assists. The Sail have some good momentum right now, we will see if they can keep it up as they have a much more challenging week ahead of them.

A tough schedule combined with some close losses keeps Portland at this number 4 spot despite their record after this first week. While they were unable to overcome neither the Clappers nor the Vice, Portland kept both games within two goals. I would have loved to see Portland pull off at least one of those upsets, however I don’t think losing to some of the best Pro Division teams is really worthy of being moved down this list. Portland has a much more manageable week coming up where we will see whether they can bounce back or continue to struggle.

I was worried about how the Bandits would perform without Panther, however they immediately proved how silly those concerns were with a great week 1 performance. Solid wins over the Rats and Smokers combined with a close loss to the Clappers leaves the Bandits looking as good as they did to end last season. Derek led the way scoring wise, picking up 11 goals and 2nd star honors. I still need to see a bit more from Brooklyn before I move them higher up the list, but if they keep this up they will be moving up in no time.

This is a team I didn’t really want to put this far down the list, but I feel like I have no choice. The Rats had some weird ups and downs. They started the week with a loss to the Bandits where they looked a little lost. They then followed that up by almost beating the best team in the league. The win against Carolina was a good way for Richmond to end their week, even if only 2/3rds of that game actually got played. That OTL against the Clappers shows this team certainly has the talent to be a threat this season, but like I said this team is certainly taking some time to get used to one another.

A rough first week here in Pro for the Smokers as they failed to pick up their first win, however they showed some potential by the end of the week. A blowout loss to the Bandits and whatever you want to call that mess against the Rats were definitely their lowlights this week. However, the Smokers ended the week with a great fight against the Sail, bringing SPL’s hottest team to OT. I still believe Carolina has the potential to take down some of the best teams in this division, hopefully they can reach that potential before it is too late.

The Omegas struggled like how I thought they would during a rough first week. 3 losses, though to the Omegas credit they kept most of them close. I wouldn’t say Olympia is a lost cause, their ability to keep these matches close shows they certainly have the potential to pick up some wins, but they are definitely going to have to win some games this next week if they want to still have a decent shot at making playoffs this season.

Even with the loss of Vorq the Ontario Outliers have found their way to number 1 on this list. While losing their main star does hurt the Outliers a decent bit, Ontario proved that they can perform just fine without him. After their blowout victory against the Eagles the Outliers picked up nice wins over the Hoots and the Baguettes to keep themselves undefeated heading into Week 2. Ontario looked solid in their wins, though one could argue it was more luck than skill that led to their win over the Baguettes. Still, the Outliers have proven themselves as the team to beat here in IM.

We only got to see two matches out of the Grizzlies this week but they impressed regardless. Alongside a solid 8-6 victory over the Hoots the Grizzlies also picked up a major comeback win over the Baguettes. These performances lead to Baumz picking up 3rd star honors. While I was worried about how Wendy’s would perform in IM, he proved those doubts wrong as he also put up a solid 10 point performance. 2 games is not enough to make me think the Grizzlies are a sure fire bet for promotion, however they did prove they are a worthy contender for a promotion spot.

A rough first week finds the Baguettes moving slightly lower on this list, though they could easily bounce back. A couple of close losses to the Grizzlies and Outliers look bad on paper, however the way Quebec performed in those matches leaves hope that they can return the favor later down the road. Luckily the Bags got to end their week on a huge blowout victory over Denver, allowing them to build back some confidence. The Baguettes have a slightly easier schedule this next week so I wouldn’t be surprised to see them moving back up this list in no time.

Coming in at the 4 spot is a team that looked pretty average overall this week. The Omelets put together some good performances this past week, with solid wins over the Hammers and the Hoots. They also had a couple of key losses though, a blowout against the Baguettes and a close, last-second loss to the Eagles. The Omelets looked solid at times this week, and pretty rough at others. I think the Omelets are a good team, however that performance against Quebec has me worried about their potential to compete for promotion. Denver has a very hard week ahead of them, with games against the top two teams on this list. We will see if they rise to the challenge.

A short but sweet week for the Hammers as they find themselves moving up to the 5th spot. They started with a loss to the Denver Omelets, though they were without their main offensive weapon HZR for that game. They followed up that loss with a solid 8-6 win over the Eagles which lands them right here at number 5. If this week proved anything it was that the Hammers definitely have the potential to compete here in IM. While I don’t know if they will find themselves fighting for top 2, Hammers can still certainly cause some noise.

In between the last list I made and now the Eagles have completely changed their lineup. Gone are Sapster, Ghoul and Cameron and in their place are Rapier, LazyTrout, and me :D. The Eagles first game together resulted in a giant blowout loss to the Outliers however they came back and picked up a good close win over Denver. To finish off the week the Eagles lost a close game to the Hammers, which has them winding up here. While certainly not the strongest team in IM, the Eagles proved that they aren’t going to be a pushover. With a week of added chemistry for the squad, we will see if they can rebound with some solid performances.

The Hoots ended the Week 1 as the only team in IM to not pick up a win, which leads them here. The Hoots didn’t have an easy schedule by any means, having to face both the Grizzlies and the Outliers, but it was still clear that it's going to take some time for this squad to get used to playing again. The main player the Hoots success hinges on is Jonesy. It was clear from the start of the Denver game that Jonesy does not have the same level of experience as the rest of IM does. If Jonsey can learn quickly the Hoots could still have a good chance to avoid demotion, but if they can’t then the Hoots are going to be looking at a rough season ahead.