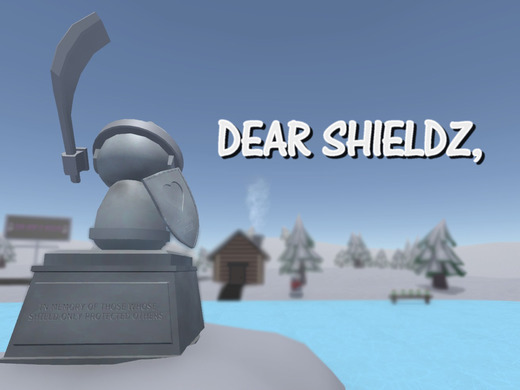 The Ghoul gives us insight into Shieldz' early career in SPL

It’s been a long while since we last talked. I hope all is well now with you. I was beta testing for Slapshot Rebound and you were grinding as always the last time we talked. Unfortunately I lost touch with you after Slapshot Rebound released.

I got back on my feet and knowing me, my dumbass can’t quit and is still going for Pro Division. I hope you're doing well wherever you are now and hope you're resting peacefully. I still talked about the old days of SPL a lot when we were both up and coming prodigys when the Open Division was actually competitive. I guess a part of me is still stuck in the past. However, living in the past is living in denial, but I’m starting to live more in the present to set up the groundwork for the future.

Green was another up and coming player, but after beating him and the Oklahoma Exotics, it was The Tokyo Ghouls VS The New Jersey Minuteman. I was scared to face you guys, but at the same time excited. This was because you had a rookie Baumz and yourself on the team. You two were prodigies. All five of us Green, Baumz, Kush Mama (Went Up To Pro During The Season), and I were prodigies on a silly PC hockey game. You and I however had a friendly rivalry, both of us praising each other and going at it, whether it was ranked matches, pubs, or an SPL match.

During our first match of our 3 games series I was scared as hell. Everyone was saying Baumz was gonna go beast mode on us. Baumz, like the elegant bear he is , dropped 4 goals on us for the New Jersey win 4-2.

“Baumz that friggin 'bastard!” I cursed into the wind.

We praised each other then I got to work for the next few days and developed strategies. Whenever we were on call you would talk about the three games series and say “I would tell Johnboi and Baumz every game, be ready Ghoul is gonna be prepared with strategies.” I would tell my team the same thing every game “Shieldz and his boys are gonna come at us with some insane plays. We need to be ready to shut down their offensive opportunities.” Johnboi would often tell me you were always determined to win, that you strive harder than anyone and I believe him you put in so much effort and it shows.

We would often reminisce over the early days of SPL. We would both keep going at each other even though my team would eventually disband. You were always striving for more and made it to Pro. I was proud to play against you, because your skills were greatly underestimated and if you were still here no doubt you would be one of the best. It was always a challenge against you and you made it fun.

You’ve done a lot for this community. You would always block the hate with your shield and attack them with your sword of positivity. Anyone who came your way you always saw the good in everyone in this community. You did a lot with broadcasting, helping out the SPL Media Team during the early days. Your work and personality was appreciated wherever you went. I think we could all learn a thing or two from you and your integrity.

We all miss you here and would love to see you again but we know you are on to better things in a better place now. Maybe one day we can sit down together and hang out. Your time here will never be forgotten. I just want to know one thing though Shieldz. Did you know you were appreciated here?