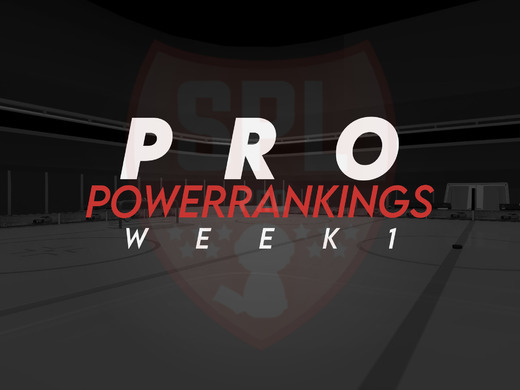 With the first week in the books check out where the Pro Division stands!

Pittsburgh is off to a great start to the season!  Clocking in 28 goals in their 2 games (against Comets & Beauties) the Vipers are looking as sharp as ever.  Milk stepping up big tacking on 10 of those goals on his 20 shots. The team leads the division in their pass completion rating, only having 1 turnover per 4.8 passes (4th best in the league). With Enry looking sharp as ever leading the division once again in points, and ChristianFF dominating the neutral zone and faceoff dot. It's hard to dispute the fact this team is ready to make another strong playoff run this season.

Plymouth had a strong first week, bagging both wins.  First a 9-1 victory over the new New Jersey team and the second match 6-3 over the Grizzlies on Monday night.  Kyler showing once again that he is a scoring fiend. Kylar reminding us that he can stick battle with the best, along with the game winner on Monday.  Blue isn't pulling any punches this season as he sent 4 home in the Noobs match then 2 against the Grizzlies.

The Grizzlies split the difference during week 1, nabbing 2 of the 4 points during the first week.  They played solid defense during the first game of the season stopping 16 shots while scoring 9 themselves to take down the Noobs on Monday. Rambome in that game shot 1.000 with 4 shots and 4 goals, along with his 6 saves + 2 blocks was the biggest difference maker down on the ice. Their later matchup against the Plague wasn't as fortunate as they weren't able to match the offensive control Plymouth put out in the late game. They made 13 great saves but facing 19 shots in a game is a rough hill to get over for the defense. That in tandem with the posts denying Green more than the Plymouth goaltending (3 posts hit, 2 shots.) Yosemite will have to get more sustained pressure in the offensive zone if they're going to square off with the other upper pro teams.

Ocean City stays the same. All of their 1st week matchups were pushed to the following week due to IRL time constraints.

Los Angeles played a great first week! Pulling 2 out of 4 points off the table putting the comets 4th on the standings.* They bit the bullet at the beginning of the week, getting their Vipers game out of the way early which ended in a 15-7 loss. Derek played in his first SPL game since March 14th, and looked sharp netting a hattrick and 5 points in his first game with the new squadron. Lafftrakk also tallied 3 that night in Pittsburgh, but you can only do so much when trying to match the offense of the Vipers. Later that week the Comets took on the newly pro Edmonton Beauties where they found their stride.  Outshooting the opponent 15-11 and outscoring them 8-4 for the victory.  Lafftrakk led the scoring 5 of his 7 shots.  Doug had a HUGE night in net recording 7 of the teams 7 saves. And the team as a whole played very responsibly only turning the puck over 22 times compared to their 35 takeaways.

The Noobs had a rough schedule this first week.  Playing the veteran Grizzlies and the hot hands in Plymouth. The team tallied 8 goals during the week regardless of the big names across the ice from them and are starting to find their game.  The team is 3rd in the division in shots, and if they keep it up and continue to put that kind of pressure on net they are bound to take off. New Jersey currently is 14th among the league in passing percentage, completing 120 passes and turning the puck over 50 times (70.59% passing%).

The Beauties despite the adversity early this season still put up a good fight during week 1.  Not the outcomes that the team wanted but it's a step they needed to take. Having to match against the Vipers and Comets during week 1 the boys in Edmonton had their work cut out for them.  They played the Vipers match first on opening day which didn't quite go their way.  Ending with a 13-3 score left them a little deflated but it was expected, starting the season against the defending champions is as hard a task as they come. Rabbi played big in net, putting up 8 of the teams' 14 saves. But facing 25 shots is difficult to match in the offensive zone.  Later in the week they had a softer match against the Comets. That game finished 4-8 with Fueeqo putting up another 2 goals, accompanied by Rabbi and Rokybo tallying one as well. The shot difference favored Los Angeles but not by much, 11-15 were the sums at the end of the 3rd. Rabbi put up another 6 saves on the night putting him 1st among the division in that category.