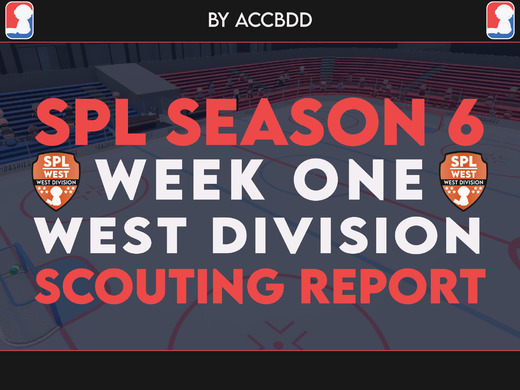 Welcome back to the West Coast scouting report! I'm ACCBDD, and we have a lot to cover this week.

First and foremost, the incident! The Milk Duds had a mishap this week, roster-wise - they had been found to have had an outside player on the ice under the alias of another, which is against SPL rules. This resulted in that outside player, along with the captain LeBomb James A.K.A King Dud suspended for the remainder of the season, and a forfeit win for the Capybaras. When asked about the controversy, King Dud LeBomb responded: "id rather take the hit for it and let the other team have some fun playing the game we scheduled than to do all that extra work [opening a ticket for an emergency sub]"

Now, let's check in on each team, in division standing order:

⦁ Edmonton Beauties
A great start to the season for the Beauties - 3 solid wins. Fueeqo especially has been a machine on the ice, with over 5 average goals per game and an impact rating of 9.33. Rabbi Mekhail has also been holding it down, with 13 assists over their three games this week and 18 points total. The Beauties have been known in the past to have incredibly oppressive offensive pressure and so far it looks like this season is more of the same.

⦁ Yosemite Bobcats
The Bobcats have also had a great start to their season with 3 solid wins - standouts on this team are A Rambome Player and Wendy's Cashier, both with at least 6 points a game and impact ratings of over 8. Wendy's has especially stood out - he's had an average possession time of 84 seconds per game. The Bobcats' strength has always lain in strong puck control, and once again it seems like this season is no exception for the veteran team.

⦁ Oregon Capybaras
Somehow, the Capybaras have made it out of the first week with not one but TWO forfeit wins - the first due to the Milk Duds' aforementioned roster issues and the second one due to the Weenies simply not scheduling their games. This means Oregon has been put in a pretty nice position, at #3 on the division standings; all they have to do now is maintain their positions in this week's upcoming matches against the Edmonton Beauties and the Palm Bay Puck Hogs, both very strong teams.

⦁ Palm Bay Puck Hogs
At #4 in the standings, the Puck Hogs are also in a great spot to start this week. The team has had a couple big roster changes in the first week: YvngHades transferred captaincy to Snooze, and they've picked up previously-retired player Moo Dangles. This will be Moo's first SPL season since Rebound season 2, where he played as a 1 on the Covington Crows (this writer's old team!) In the two games he's had on the ice, he's managed to put a 9.65 impact rating and 18 points on the board. Snooze and Jiggy are also putting up some impressive stats: Snooze holding it down with an average 8.5 saves per game and Jiggy with an average 5.5 points per game. If you get a chance, check out their game against the Moguls: it was a true barn-burner, with almost 30 goals being scored between the two teams.

⦁ Vancouver Island Marmots
The Marmots have had a rough start to their season - a 5 point loss to the Bobcats, one of the strongest teams in the league, and an unplayed game with the Weenies mean they're coming in at #5 in the standings. In their game against the Bobcats, they tried their best; but it seems like they just couldn't generate enough momentum to break through the Bobcats' control-based playstyle.

⦁ High Pings
The East coast embassy team, the High Pings, have had an interesting start to their season. Playing the top two picks (in my opinion) for the division championship this season they held their own - a respectable 5 point loss to both the Bobcats and the Beauties promises some good matches coming out of this team. Notable in their games last week was captain Looees - despite out of region ping, he managed to put up 7 points over both games.

⦁ Minneapolis Milk Duds
Unfortunately, the Milk Duds suffered from some rule violations last week, meaning there isn't much to go off of stats-wise here. Here's hoping we see some great games from Minneapolis these next few weeks! Especially interesting will be their matchup against the Bobcats this week.

⦁ Washington Weenies
There is, once again, not much to say here - the Weenies haven't played any of their games scheduled for last week.

⦁ Malibu Moguls
Another rough one, the Moguls had to play two of the best teams in the div to start their season off. Coming up this week should be some interesting games: the Capybaras, High Pings, and Marmots should all be fairly evenly matched with the Moguls. Standout players on this team are ORO and DerangedToad, with 13 points and 16 saves, respectively.
Phew! Lots of shakeups last week, and some interesting matchups coming this week. Personally, I'm excited to see the Puck Hogs @ Capybaras and the Moguls @ Marmots!