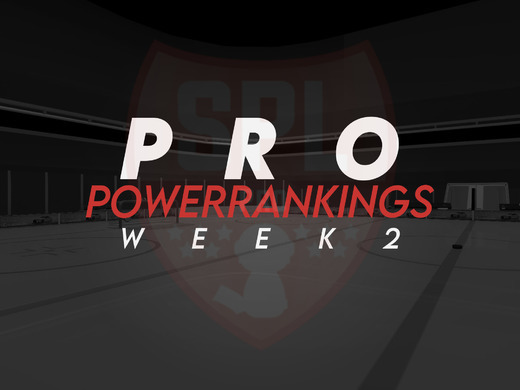 2 Weeks in the books, 4 to go! Check out this week's power rankings for the Pro Division.

Pittsburgh once again setting the bar for the pro division.  Sweeping their 3 opponents this week, marking 36 shots for goals. This team leads the LEAGUE in goals scored by 14 over the Slapdaddys in the Open Division and the Montreal Popes of Challenger.  This week's biggest victory for the team has to be the 5-15 mercy against the 4th seed Grizzlies (more about that match later.)

The Plague continue their winning streak this week extending the stint to 3 victories. In the Beauties match they were the heavy favors. Blue exploded on offense tallying 6 of the team's 11 goals. The Plague outshot the Beauties 19-4 and only allowed 1 goal in the match.

Los Angeles caught a spark and caught fire with it. If the betting tables were accurate none of these outcomes should exist. Where the odds were for them they lost. Where the odds favored them, they came out on top. They started the week in Ocean City where they piled on the offense. Derek scored 7 of the team's 10, Lafftrakk stopped 3 critical shots leading to a 10-4 victory over the Typhoons. Playing their later of the back-to-back matches that evening against the Noobs. The boys from Los Angeles put up 9 shots and 5 goals during the match but was out gunned on offense letting up 9 during regulation. They rebounded on Day 2 with a 8:30 game verses the Rambomeless Grizzlies. Derek once again had a dominating offensive game. Scoring 85% of his shots, tallying 6 of the team's 10. Doug blocking 7 Grizzlies goals. LaffTrakk also finding 6 points on the night. Not much to complain about on the Comets side as they outshot the Grizzlies 19-11 and outscored them 10-6.

Yosemite played this week without Rambome, and it showed. The team finalized a .463 save percentage, allowing 25 goals on 54 shots during their 2 games this week. While nobody expected the Vipers to lose in their matchup against Yosemite. Not many people put in their betting ticket with the Comets leading the Grizzlies. Right now Yosemite is just looking forward to putting this week behind them and focus on whats to come this next week.

The Noobs proved they can hang with the big dogs this week. Going 1-1 on the record sheet and beating the rising stars in Los Angeles has to feel good in the locker room!  Having one of the first underdog victories this season pushes them up past, what would have been 2 teams, if the Comets didn't have their best week in Franchise history.  Regardless, during this week the Noobs tacked on 17 goals on the opponent and only allowed 16. BrewtL lead the team overall in the week with 7 goals, 4 of which came in the 9-5 victory over the Comets. If X can turn down the Turnover department this team has the potential of finishing top 4.

The Typhoons pushing back 2 of week 1's games had to play over half the division during the week. The loss to Pittsburgh was expected, but what wasnt expected was Los Angeles winning 10-4 over Ocean City. Hex was able to tag on 3 of the team's 4 goals.  But the team only stopped 3 of the opposing 13 shots. Later that week the Typhoons were able to sqeak out a win on the Plague through their forecheck game and puck control.

The Beauties continue to try and get their footing in the Pro Divison. Rokybo has the only goal this week for this team. The Beauties end their second week looking for their first win and might be able to find it next week as they take on the Grizzlies and the Noobs.