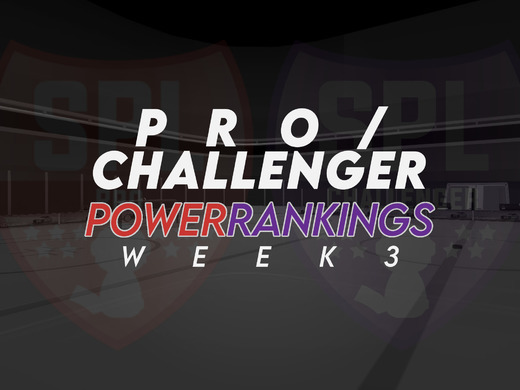 Check out Noah and Meno's take on the Challenger and Pro Division after week 3.

The reigning champions, Pittsburgh Vipers, prevail as kings of the Pro Division. After a strong 5-0 start the Vipers look to continue their commanding control atop the standings. In their first game they faced-off against a formidable Los Angeles Comets squad, yet wore down Captain Lafftrakk and company to a decisive 15-7 victory. I’d like to take this part of the summary to congratulate Eli on his rumored retirement from SPL. After a remarkable career as a Major and Season 5 champion, Eli has earned his right as one of SPL’s best. As much as he’s trash talked everyone, including myself (lol) in pubs, he’s
reached an incredible accomplishment and goes out a champion. That being said, the current core of Enry, Milk, and ChristianFF remains a dominant roster and should
continue their prodigious careers.

2. Plymouth Plague (3-1)
After an offseason full of roster transactions, the Plymouth Plague have secured one of SPL’s greatest superteams to date. Blue, Kylar, and Kyler started off the season on a high note defeating the New Jersey Noobs by a commanding 9-1 scoreline. Blue’s scoring abilities have resonated with the rest of the roster, giving them extra scoring prowess to earn these impressive victories. The offseason pickup of Kyler cannot be understated. As one of SPL’s few multi-champion figures, he brings a veteran presence and an accomplished winning resume. Based on prior results and the roster built, I would anticipate a bright future for the most confusing casting combination (Kyler/ar) we’ve seen.

3. Los Angeles Comets (3-2)
The Los Angeles Comets, captained by Lafftrakk, return with a new look adding Doug and Derek to the mix. After the 15-7 loss to the Vipers, the Comets bounced back firmly defeating the Beauties, Typhoons, and Grizzlies by a combined 14 goal-differential. A large margin for such cutthroat competition. Leading the team in goals is Derek with 19- goals in just five-games. Each member of the roster from top to bottom is within ninepoints of one another. The depth of the Comets is arguably their biggest strength. The team works well together and I’d predict a bright future for the squad.

4. Ocean City Typhoons (2-2)
The Ocean City Typhoons have developed their roster into what was originally believed to be a miracle run in the Season 5 playoffs into a legitimate contender for Season 6. Having a stable three in Cruxe factors heavily to their high possession rate per game. His 127 seconds of possession per game ranks second in Pro only to fellow three, Kylar. The Typhoons lost early to the Vipers and Comets, but have since defeated the Plague in a close 8-7 matchup. No, it might not be the ideal start to the season for the Typhoons, but the roster looks to be turning it around preparing themselves for another deep playoff run.

5. Yosemite Grizzlies (1-3)
Starting the season 1-3 is probably not what captain Wendy’s Cashier and company had in mind. That being said, I’m sure Wendy’s veteran presence can propel the Grizzlies back into the top four of the standings. Two of the three losses the Grizzlies have faced this season have been by four goals or less. They’re coming as close as they can to winning, but haven’t yet been able to push themselves into stringing together multiple ins. Fortunately, the Grizzlies were able to take down the newly promoted New Jersey Noobs in order to take the number five spot in this week’s fierce four.

6. New Jersey Noobs (1-3)
Speaking of the New Jersey Noobs, next up, is well… The Noobs. With the core of Captain BrewtL, X, and ILoveFatChicks sticking together, the Noobs look to create a permanent residence in the Pro division. Thus far, I’d say they’ve proved themselves to be a solid Professional team by defeating the Comets by an imperious 9-5 scoreline. I’d also love to comment on the Noobs’ arena name – the Salty Spitoon Coliseum in Bikini Bottom, NJ – by saying, I love it.

7. Edmonton Beauties (0-4)
The Edmonton Beauties round out the bottom of the Pro division for the early season Fierce Four rankings. Unfortunately, the Beauties have started out their professional debut quite poorly. Losing the first four matches, then losing Rokybo is a brutal start to a season. I’m not entirely sure who the Beauties are looking into picking up after Rokybo’s departure. Whomever they decide to pick up will need to bring monumental value to put the Beauties back on track and out of the relegation spot.

The Slapshot Premier League’s sixth season in Rebound is off to a raucous start and the Challenger division is no exception! With most teams a third of the way through their schedule, it’s high time to take a look at their progress and rank each team’s chances to either promote to Pro or be relegated back to Intermediate.

1. Pennsylvania Pythons (5-1)
After inserting prolific goal-scorer Spectacular333 into their already stacked lineup, the Pythons look poised to compete all season long for the top spot in Challenger. With key early victories against the Neapolitans, notwithstanding the Nepolese missing their creative midfielder Noah, and the Orangutans; the Pythons looked determined to join their parent club – the Vipers – in the Pro division. However, with Spectacular taking a well-deserved rest day, the leading team had their first slip up against the Montreal Popes and with that their Challenger championship was jeopardized. The Pythons followed the rout with a needed bounce-back victory against the hungry Outliers, putting their season back on track. With Jahziah and Spectacular joint-top in goals, and Soulless leading the way in assists, it’ll be difficult to catch those slithering serpents.

2. Napoli Neapolitans (4-1)
Though not always the greatest measurement of a team’s prowess, the Neapolitans lead the division in goal difference, showing that the so-called Ice Cream Boys and their new additions can hang with the big boys in the league’s second highest division. Building confidence with back-to-back opening victories against the Popes and Spinners, the young men from Napoli felt emboldened and pursued first place with a renewed vigor. They, too, hit a mid-season road bump, falling to the Pythons behind the strength of Spectacular’s special five goal game – and despite Meow’s fifteen save performance. With back-to-back victories against the strong Outliers and the up-and-coming Michigan Mafia, the Neapolitans seek to conquer the back half of their schedule through the power of their chemistry, capable defending, and impressive passing – as the league’s top three completed passes leaders are “strawberry, chocolate, and vanilla flavoured ice cream.”

3. Montreal Popes (3-2)
Tracing back to their days in Season Two, the francophone Montreal Popes have always been looked at as somewhat of a dark horse. Terrific two-way player UngluedSnail breathed new life into their season’s slow start with an outstanding nine goal performance against the league leading Pennsylvania Pythons. No team aspires to starting a season behind the eight-ball at 0-2, but with three revitalizing wins against top tier teams, the Popes find themselves back in the middle of the top three picture. Featuring the same starting lineup for three consecutive seasons – and having the reputation as a team that only gets better as the season goes along – do not count the Popes out heading down the stretch. In addition to their on-ice chemistry, Les Papes also include one of the best bench players in the division: defensive minded playmaker Gr8e rounds out their roster and will be instrumental if the team desires a championship title.

4. Ontario Outliers (2-3)
After a strong showing as captain the offseason’s draft cup, the Outliers were dealt a blow right off the draw as their captain Cape was put on the Long Term Injured Reserve, deciding to spend this season in recovery. However, the team was left in the very capable hands of experienced talisman Highflyer and the pass-first point-men Renard and Kacktus. Despite faltering early on against the supposed easier part of their schedule, including a particularly devasting forfeit loss against their nearest competitors Pittsburgh Spinners, the Outliers posses the quality to make a challenge to qualify for the vaunted third place spot in the division and have the opportunity to play their best hockey in the Pro Promotional Series. The Outliers will indeed need to rely on Highflyer, who sports a top five goals per game ratio, and continue winning close games – while showing up for scheduled appearances – if they want a shot at promoting this season.

5. Pittsburgh Spinners (3-2)
Despite starting off on the wrong foot, with opening losses to the Neapolitans and Pythons, the Spinners have bounced back with three consecutive victories which see them in the playoff picture in the season’s third week. For continued success, captain Cheese must demand more offensive output from seasoned goal-scorer Cman and skilled sniper KennyT, all while maintaining his own impressive shot-stopping record. With the most difficult part of their schedule done and dusted, already facing each of the top three teams once, the Spinners will want to continue their winning ways against the newly promoted Michigan Mafia and spiraling Ice Orcas.

6. West Virginia Orangutans (0-4)
Granted, the Orangutans have not yet won a game this season, but the peripheral stats show that they are poised to at least remain in the Challenger division for next season. Three of their losses have come by less than two goals, including grabbing an allimportant overtime loss point against the Outliers; TCW finds himself fifth in the league in impact rating; and the team is fourth in average goals per game, playing above what their record suggests. Former Pro player FolapaFish who, despite holding the ignominious title of Season Five’s Turnover Machine, will demand more of himself, as he features some of the best hands the division has to offer. Cyoue and TCW, too, will have to keep up their goal scoring form as captain Echo seeks to compose his club in an effort to avoid back-to-back relegation seasons.

7. Michigan Mafia (0-1)
This tightly knit quartet has made this writer eat his words after their magnificent run in the Challenger Play-In Series, perhaps answering the question once and for all: chemistry is more important than simple on-ice skill. Now comes the hard part for the boys from Lansing, an attempt at a season-long campaign staying up in the highly contentious Challenger division. The boys started strong in their inaugural game, sporting a 4-1 first period lead against their rival Neapolitans; though they only scored one more goal for the rest of the match while allowing an additional thirteen – with an incredible eleven points coming from Noah. Searching for answers after only game played, the relatively young squad will look to hold onto more possession, create sharper scoring opportunities, and avoid losing the puck in the neutral zone.

8. Maryland Ice Orcas (0-3)
After losing each of their first three games, the Ice Orcas have seemingly fallen into disarray. Not only has their captain, Clifford, left the team and relinquished control to Freakachu, but rumors have been swirling that Skiztastic is considering leaving the group as well. In an exclusive given directly to this author, the coastal club has extended a tryout offer to new free agent Bford, dropped after dutifully serving the Okinawa Generations for two seasons, scoring more than fifty points for the team (including playoffs). More than capable of snapping off a few quick goals in rapid succession, Bford will hope to reinvigorate the team if chosen. Reliable puck-handler Cortes, making his debut season, and undervalued Freakachu hope to hold down the ship during this tumultuous time and quickly build chemistry with whomever they choose to join them for the rest of the season.