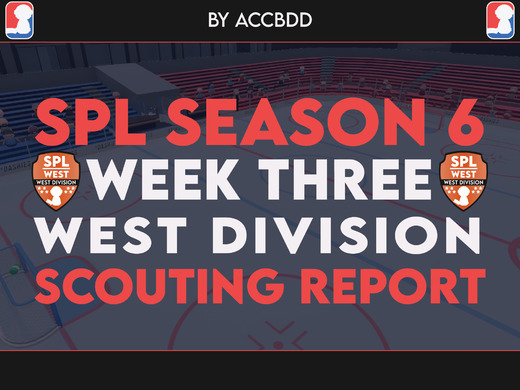 Join ACCBDD on a recap of West's 3rd week of play!

Welcome once again to the West Coast scouting report!

A very special, slightly delayed edition, too! In division news, we have two roster changes - firstly, Lebomb James of the Minneapolis Milk Duds has transferred captaincy to Barbeque, left the team, and they've signed Blue back onto the team. Secondly, the High Pings have dropped Spinach and Dilson, dropping their roster to only two players; hopefully they can find a third player to stay in the league.
Now, lets take a closer look at each team, in division standings order:

⦁ Yosemite Bobcats
⦁ A couple close victories against some teams lower in the standings last week - a 4-5 win over the Moguls and a 12-11 win in OT over the Puck Hogs - alongside a FF win over the Beauties puts the Bobcats in position #1 going into week 3. Wendy's continues to be a strong presence on the ice for this team, with strong control and enormous offensive pressure forming the backbone of this team's strategy.

⦁ Edmonton Beauties
⦁ A FF loss to the Bobcats and an unplayed game against the Milk Duds means there isn't much to catch up on with the Beauties going into this week. In lieu of a discussion, shoutout to Fueeqo for getting star of the week both in Week 1 and 2 of this season!

⦁ Oregon Capybaras
⦁ The Capybaras have had a good past week, putting up two solid wins over the High Pings and the Marmots. Coming up this week is their match against another top team, the Bobcats - look to Carried by Dad as the cornerstone of their strategy against them.

⦁ Vancouver Island Marmots
⦁ Winning the two-week long fight for fourth place in the league, the Marmots solidified their hold on the position with a FF win over the Puck Hogs and a well-fought victory versus the High Pings last week.

⦁ Minneapolis Milk Duds
⦁ The first among equals in the four-way tie for fifth place in the division, the Milk Duds have been a cryptic team this season - hopefully we'll get some more stats but the games that we have seen so far have shown that the Duds are not a team to be taken lightly.

⦁ High Pings
⦁ Holding on even through a ping almost quadrupled to what they're used to, the High Pings have had a rough past week, and moving into this week against the Bobcats and the Milk Duds it looks like it will continue to be rough.

⦁ Palm Bay Puck Hogs
⦁ An FF loss and a heartbreaking OT loss to the Bobcats means the Puck Hogs start this week inside the tie for fifth in the division - upcoming games against the Milk Duds and Beauties mean it'll be an uphill battle for this team.

⦁ Malibu Moguls
⦁ The Moguls, after riding high for a couple days at #5 in the division are now down to #8 after losing to both the Milk DUds and the Bobcats. Their upcoming game against the Puck Hogs will be an interesting one to watch this week!

This week is somewhat of an interim as it pertains to matches, but there's still a few very interesting ones coming up! Keep an eye on the Moguls-Puck Hogs battle for #6, any of the Milk Duds games now that they picked Blue back up, and the Capybaras-Bobcats matchup!