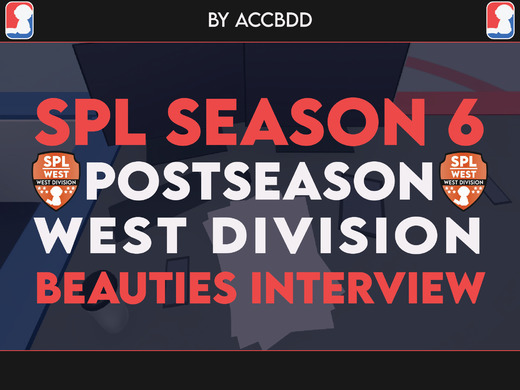 Take a dive into the Beauties Captain, Rabbi's thoughts going into the post season

Hello once again, slap community!  Now that the season has ended and we're moving into playoffs, this writer thought it would be interesting to get a closer look at one of the top teams this season - the Edmonton Beauties. Beauties captain Rabbi was nice enough to answer a few questions:

ACCBDD: Congrats on the great season! Y'all were really putting in work on the ice; my first question is how was starting this season? You picked up both Babu and Deezy, who im sure had their own style of playing from their old team the Sentinels - was it a smooth transition into the Beauties' playbook or were there any speedbumps?

Rabbi: Really smooth to be honest. Fueeqo was kind of the middle man of it as he played with them before and knew how they play. Following that, they also adjusted to how me and Fueeqo have been playing - a little bit of a different style but none the less the season went great. I had zero doubts Babu and Deezy would make big impacts on the team to bring us to where we are now excited for playoffs finishing as seed 1.

A: Thats awesome to hear! and congrats again - seed 1 is impressive especially this season with all the new strong teams; but the beauties have always been a very strong team stayin up at the top during practically the entire season!How do y'all stay so consistent? do you do anything special to train like run 2v2s or is it just qing and custom games through the Discord?

R: I believe just the way me and fueeqo are feels like lego bricks; just perfectly fitting as every season played almost has been with him, so with other teammates we teach them some good tips to help improve us and themselves, which does involve qing pubs together. 2v2s are solid for us when we do them we get a lot better at defending, mostly not letting people score.

A: Gotcha, makes sense! A little peek behind the curtain lol. As far as playoffs go who/what are you looking out for? Do any teams or players make you nervous, especially in the post-season? Do you have any specific strategies/plays you wanna share with the public?

R: We're just looking to go back for our third chip, which would be a huge achievement for the team and everyone who’s played for the Beauties the past 4 seasons. For playoffs, I’m not really looking out for much. We got a bye which is nice, but we looking at marmots or duds as our first matchup, we played them both in regular season and believe we should be able to beat whichever of those two teams come on top.

R: My strategy really has always been the same: control the puck, you control the game, you win the game - as it has shown in the past and everyone who has played on the Beauties team has felt that. Plus, with this season, 2 dynamic duos joining up on the same team means there’s bound to be lots of good plays and good results, 4 veteran west players we going to show why we finished at the top and continue to play and win like we do.

You heard it here, folks! Lots of confidence from the Beauties' captain, backed up by a great season! Finishing as #1 seed with a 12-1 record, the playoff finals are bound to be an explosive finish to a great West season.